Published on December 29, 2017 Updated on July 3, 2019 by Morison BlogDestinationsStoriesTaiwan

DONGZHI FESTIVAL TAIWAN (冬節). Every December, people celebrate what is known as the DongZhi Festival in Taiwan and other Asian countries. This festival is something that is less known in the States, and it is something I did not know about until my local Taiwanese friends brought it up.

WHAT IS DONGZHI FESTIVAL (冬節)?

Dōngzhì Festival, or Dōng Jié (冬節), is an important day in Taiwan, China, and other East Asian countries. It is typically a day for family reunions, worshiping ancestors, and eating traditional foods such as glutinous rice balls (TāngYuán 湯圓) or dumplings (ShuǐJiǎo 水餃). TangYuan also sounds like the Chinese word for reunion, so eating this makes a lot of sense.

TangYuan’s are cooked in boiling water and typically served warm, with different stuffing inside such as sesame, sweet bean paste, etc., along with with sweet soup or syrup.

The celebration is also a reminder that you are now one year older. Parents typically tell their children who like to grow up quicker to eat a TangYuan for each year they want to add to their age.

Another custom in Taiwan during Dongzhi Festival is drinking warm tonics to invigorate the body. The idea is to balance the Yin (cold) and the Yang (warm) in the body.

Although Dongzhi Festival is not an official holiday, Asian families still celebrate it all around the world. It is a good excuse to have a family reunion or to just spend time with close friends and eat some yummy food. 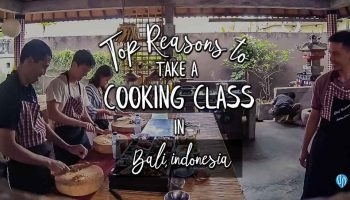 Top 5 Reasons to Take an Indonesian Cooking Class in Bali